An IRC translation of the election debate, written with prejudice. 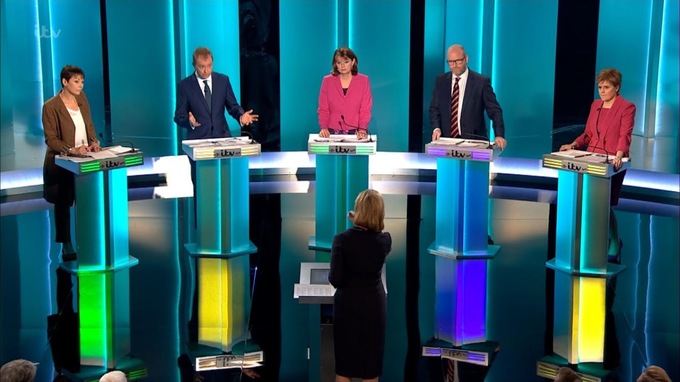 Mod:
Look, this is still cool. We had them all last time.
It’s like an elimination round. A spin-off show.
This is like the Elections Little Brother or something.

Green:
After the war, we actually invested in our country
and made all the things we now hold dear like the
welfare state and the NHS and all things bright
and beautiful. We can do that again.

Cymru:
Hey May! You chicken! You u-turning Cruella,
why won’t you come on telly and admit to the
horror you’ve caused? You weak unstable coward!

SNP:
We hate Tory cuts, and want to escape this craziness,
We need to fight a hard brexit, for the sake of
jobs. Scotland’s future should be in in Scotland’s
hands.

UKIP:
We will do the hardest Brexit, we (The UKIPS)
will take back control, we will take
control and do the hardest Brexit.
We will so reduce immigration and stop
sending any money to foreigners, we’ll
spend it on British health services,
for British people, not anyone else.

Lib:
I was poor, and I saw what Tories can do. They’re
gonna totally Brexit, so hard. Like *really* hard.
We won’t brexit nearly so hard, and then, we’ll
even double-check that you consent.

Welsh guy: Is Brexit gonna make us worse off?

Cymru: Yep.
Cymru: Still, you want it, you got it.
Cymru: We will fight for the least worst option for Wales though.

SNP: It’s gonna be bad, man. Scotland should totally avoid that.
SNP: We need to make sure May doesn’t Brexit too hard. For the whole UK.

Green: May’s Extreme Brexit is really uncalled for and not on the ballot.
Green: We should check with the people that they really want it when we know what “it” is.

UKIP: How much worse could it be?
UKIP: The EU needs us more than we need it.
UKIP: The ballot totally said “do you want immigration”. It’s in the subtext. Obviously.

Lib: I have a family! I want to avoid brexiting them too hard.
Lib: Corbyn and May are totally Extreme Brexiters, and we should check with the people.

Mod: So will it be better or worse?

SNP: Immigrants are our neighbours, and friends.
SNP: Not like Missing May, and her UKIP spokesman here.
UKIP: I don’t speak for May, she’s a backslider.
UKIP: We will brexit SO much harder.
Green: We stand up for free movement. Travelling is cool.
Lib: Our NHS is made of immigrants.
Lib: Current EU residents should have the right to stay.
Cymru: We’re leaving. But what about the jobs? Protect jobs! Jobs.
UKIP: It was *totally* a vote to leave the single market.
Everyone: No they never.
UKIP: It was right there, in the subtext.
Lib: Norway! We want to stay in single market.
Green: Libs voted for A50, we should have united against!
SNP: People voted for lies! Two countries voted to stay!
SNP: May wants to crush opposition to get hard brexit
UKIP: No second referendum, it’s like an EU thing, vote till you get the right answer.
UKIP: If in single market, can’t sign our own trade deals.
Cymru: People didn’t vote to lose their jobs! Jobs! Single Market is Jobs!
UKIP: We will get free-trade deal outside common market.
Lib: Democracy means we keep fighting and give public final say.

Immigration:
Green: Immigrants contribute to our society, UKIP are outrageous.
UKIP: There are simply too many people, a new Birmingham every 3 years.
SNP: Our economy needs migration.
Lib: Immigrants staff our hospitals and stuff.

Green: You Libs helped privatize the NHS!
Lib: Mostly Labour did! And we won’t change it, just give 1p from everyone.
Green: The Nurses hate you
Lib: It doesn’t need change, just money!
SNP: Scotland spends 7% more on NHS, you guys should do the same.
Cymru: Fund Health, not wars! Don’t stop us having immigrant doctors!
UKIP: Foreigners don’t deserve it, we want their cash for NHS.
SNP: Where you gonna get doctors and nurses without immigrants?
UKIP: Points based! One in, one out!
Lib: Taking cash from the poorest to fund our NHS isn’t British!

Mod: What about social care?

Cymru: Integrate it with health care, duh.
Green: If we clean the air, people will be heartier!
UKIP: Integrate it with health care, we’ll give the old what they deserve.
Lib: Nursings home workers totally deserve your 1p on income tax.
Cymru: Shockingly, care-workers are often on zero-hours contracts.
Cymru: Unlike us, Welsh Labour voted NOT to ban zero-hours contracts in Wales.
SNP: Scotland is integrated, we use social care to prevent illness
SNP: And we pay a living wage.

Economy
=======
Immigrant: Everything’s expensive and I’m poor. How will you help?
UKIP: Scrap VAT on Fuel, scrap Green taxes, increase tax-floor. Empower you.
Lib: Stay in single market! Brexit already made you poorer. Second Referendum!
Green: The UK treats it’s poor poorly. Tax the corporations to fund the poor.
SNP: And it’s getting worse. Stay in Single Market, higher benefits.
Cymru: We should have Living wage and industrial jobs-program,
Cymru: No public sector workers should be using food banks!
Lib: I was poor and the man didn’t give a fuck. There should be fair taxes.
UKIP: Screw the environment, free fuel for all! It’s Immigration!
Green: It’s always Immigration with you! Anyway Green energy is cheaper than burning stuff.
Green: You help the poor with rent-controls, so you can afford housing.
Cymru: Yeah, maybe reduce VAT? Non-joke living-wage might be nice?
SNP: Brexit is making things expensive and May may increase VAT.
UKIP: We ain’t building enough houses
Lib: You’ll need migrant labour
UKIP: Or we could train people!
UKIP: We build new houses, but loads of them go to immigrants.
Lib: The poor are mostly young, and the young need the Single Market.
Mod: What about Growth?
Cymru: We love jobs, and don’t want the EU jobs to go away.
UKIP: No fast trains, instead trade deals!
SNP: We need to stay in the single market. Really.
Green: Yeah, fast trains suck coz we need a green economy, a green bank.

Cymru: Nothing wrong with big classes if you have good teachers.
SNP: No, small as possible really, but mostly leave the teachers alone.
SNP: May wants to take away school meals to fund private schools!
Green: I think class sizes matter, we should fund that for more individual teaching.
Lib: School meals are great, May sucks.
Cymru: Teachers are quitting over paperwork!

Cymru: We will pay teachers to train.
UKIP: Teachers should get a pay rise, and classes should be small.
Lib: Public-sector workers need a pay rise and to be left alone.
Green: Totally. Also, we should stop telling them what to do.

IT-Geek: How are you gonna help the young folk?

SNP: More houses and jobs. But really? For everyone, not just the young. Duh.
Cymru: Labour Wales won’t remove tuition fees, Labour England say they will!?
Lib: More houses! Council houses! And the kids live the EU, we’ll give ’em a vote on that.
Green: Yep, totally. The kids should be allowed to travel, and study for free.
Green: They probably ought to be allowed to breathe too, so, you know, clean up a bit?
UKIP: Tuition fees totally suck. But also tradesmen training would be good.

Mod: You all say housing eh?

Green: Let councils borrow to build houses. It’s called investment.
Cymru: We need to build ’em and also not sell ’em off to landlords.
Lib: I was poor coz Thatcher sold my house. Councils should be allowed to borrow.
SNP: We already stopped selling our council houses to landlords.
UKIP: Houses are better than fast trains.
UKIP: We’d also pay the Scots and Welsh less.
SNP: What now?
UKIP: We totally fund your houses, we’ll have some of of that for us.
UKIP: And we’ll be saving money from the EU fees too.
Everyone: LOL! 350 million quid a week, right? ROFLMAO.
Cyrmu: We would be so fucked if you took that cash.

Lib: I promised not to increase student fees, and I totally voted against it.
Green: Hahaha.
Lib: Well, May and Corbyn are gonna hard Brexit. That’ll be worse.
UKIP: We want grants, but too many kids are learning. They ought to be tradesmen.
Cyrmu: So who gets to go?
UKIP: Not the Media-Studies and Arty-Farty courses, for sures.

Mod: What about the inter-generational war?

Green: Peace, not war! Both pensions AND grants!
SNP: Yep. I got a free education, and so should the kids.
Lib: Climate change needs fixing, or the kids are fucked.
Lib: Not to mention (though I will) the child refugees.
Cymru: Oldies vote, kids don’t. If the oldies are favoured, guess why? Duh.
UKIP: The oldies are screwed, they needs triple-lock times what the kids do.

UKIP:
We will brexit SO hard, nobody else here will brexit
as hard as we would. We, The UK are great, and by “we” I don’t
include the immigrants. We really need to stop helping other
countries, and spend the money on our NHS and our Army.

Britain is so great!? Don’t you think?

Green:
You should vote what you feel in your heart. I mean.
We should have talked about how the climate is fucked,
but we can fix it, if we work together and care for each other.

Cymru:
Welsh MPs will represent Wales, and you know those other
welsh parties aren’t proper welsh.

SNP:
We can be a strong opposition when the Labour
isn’t Strong. We’re strong. We want jobs and
progression, and the Scots should have strong
groups of strongness, stronging all over
the north. We’ll out-strong everyone with how strong
we are. Nobody is as strong as us. Strong! Strong!

Mod: [Mostly said in tone of voice:]
As you know, the other parties do exist, they
just don’t respect you enough to turn up and
actually reply to the opposition for you. They
know that they have your vote anyway.
Or that you’ll be too lazy to vote.
Why should they care?

We are all so fucked.