I never really believed the polls when they were predicting like half of all votes would be voting Tory, so I’m not sure there’s been as much of a swing as is reported really, more like a polls-error-correction. 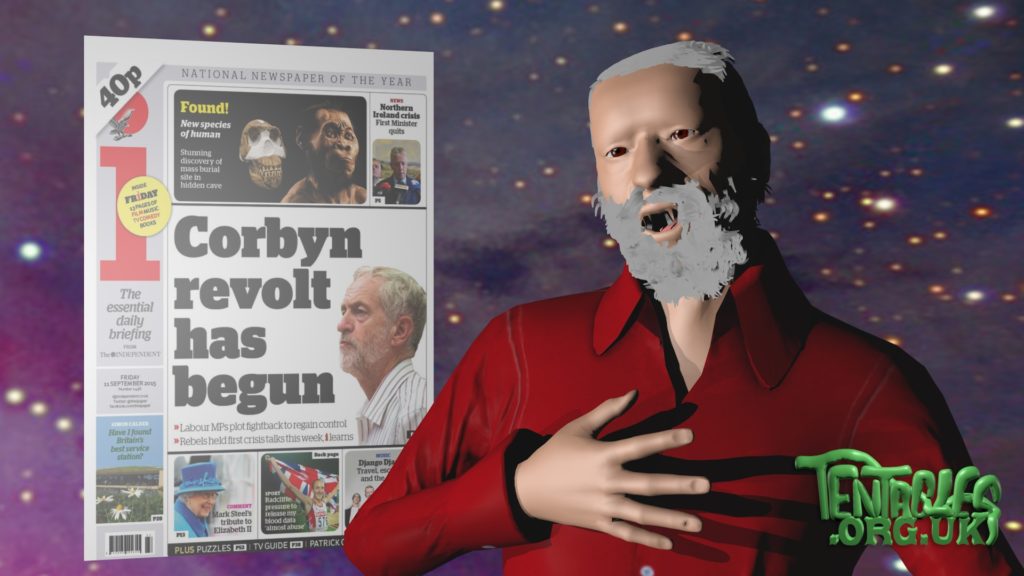 Through most of the elections I’ve been really aware for, there’s been little choice on offer frankly. Neoliberal Conservatives Vs Neoliberal New-Labour vs Neoliberal Lib-Dem isn’t exactly a wide ranging menu.

The whole of the press and most of the country still doesn’t really understand the difference between a currency user and a currency issuer, which means that the whole economic debate this election has basically centered around untrue economic fallacies like “we must pay off the debt” or “We can’t rise taxes on the rich” or the question “how will you pay for it?”

Here’s an economist specializing in monetary-theory explaining that:

Quantitative easing and tax-breaks has given billions to bankers, the corporations and the rich. The wealth of the country has doubled over the last decade, but the wealth of the average workers hasn’t risen at all. The economy has been run for the rich, by the ultra-rich, against the poor and the sick and the disabled. State investment has been cut back, with the predictable negative consequences for the economy. Without government spending to fuel the economy, the economy withers.

The conservatives are terrible on the economy.

There is no way to vote against Brexit now. All the parties intend to negotiate leaving. There are some types of exit that are more damaging than others though. May’s “No deal” exit would result in massive capital flight, huge amounts of unemployment, and an economic crisis to put 2008 to shame. She’s asked for a stronger hand, when a more sensible solution would be to ask for a wider range of input and a genuine cross-party negotiating team to find the best route out of this mess.

Here’s Thomas Clark listing some reasons a hard Brexit “no deal” will be awful:
http://anotherangryvoice.blogspot.co.uk/2017/06/why-are-so-many-people-actually-falling.html

Truth is that we need immigrants, we need good trading relationships, and we need cooperation in building cross-border law and regulation. We will need these things in or out of the EU. I would prefer a cross-party all-uk government of some sort to ensure everyone is represented at those talks. I imagine we’ll get some of that with any of them, but a strong conservative government will be listening less to the needs of the working people and the environment when deciding how to proceed.

The conservatives are terrible on Brexit.

May’s government, as home secretary and as prime minister, has claimed to give the police all the powers they need. But certainly not man-power. Police numbers are cut back so heavily that we literally have soldiers on our streets doing police work.

Meanwhile they constantly increase the size of the haystack that the cops have to search for crime-needles with some of the most invasive and destructive internet surveillance laws in the world. They have plans to ban cryptography which would ruin the UK internet industry and force all sensible Brits to use foreign messaging services and internet providers.

And they will continue cuts to policing.

The conservatives are terrible on crime.

Our public services are in private and foreign hands. Our trains are run by the Dutch and Germans. Our electricity grid and planned nuke stations are Chinese. We pay other states subsidies to run our services, all the investment profit ending up outside these shores. There is only one state banned from trying to run our trains: The UK. The Conservatives think the British people are uniquely unsuited to running their own infrastructure. This is economically insane, and not even efficient and about as far from patriotism as it’s possible to get, yet they wrap themselves in the British flag.

Here’s a video from the people of Europe thanking us for giving them money from our privaitzed railways:

The conservatives are terrible on public services and patriotism.

Our government continues to cut back on the number of soldiers and guns too, preferring to spend our defense budget on useless weapons of mass destruction. They bomb fragile unstable countries, creating more terror and radicalizing more insurgents. They prop up dictatorships, and sell weapons to terror-supporting states like Saudi Arabia.

The conservatives are terrible on defense.

They tried to sell off our forests, they will reduce controls on pollution, they support fox-hunting and ivory-trading, they wouldn’t even sign a letter condemning Trump for leaving the Paris accord. They slash funding for renewable energy while continuing to give money and favours to the legacy carbon-fuels industry. The favor Fracking over Windmills and Oil over Solar.

That is completely backwards.

The conservatives are terrible on the environment.

And frankly, our whole society is downplaying it pretty hard this election. This matters more than it’s being talked about.

The NHS is crumbling, deliberately underfunded and understaffed in order to propose privatization as the only solution. We literally train fewer nurses and doctors than are needed to keep the health system running, relying on migrant labour to plug the gap. Our health-system already offers “pay to jump the queue” doctors appointments.

The conservatives are terrible on Health.

Meanwhile our mass media, owned or manipulated by billionaire tax exiles, works hard to present the opposite of the truth. They present willingness to start a global nuclear war as sane, and unwillingness to do so as insane. They present cuts and defunding and lack of investment as sound fiscal policy, and a national bank to invest in green technology infrastructure and jobs as fiscally disastrous. They present robotic repetition of inanity as strong leadership, and honest discussion of policy and cooperation as weak. They present terrorism as deadly when hospital cutbacks are far more deadly. They present haranguing and insulting our EU partners as good negotiating strategy, and a phased plan of cooperating during withdrawal from the EU, retaining as much benefit as possible, as undemocratic.

Here’s a song our media barons wrote in someone’s dream:

But they are losing control now the people can talk directly to each other. I’m not sure that this tactic helps the media much among most people though. Certainly in the early days it was helping Corbyn to be attacked so much.

Or media is terrible. No wonder the Conservatives want to suppress it’s alternative, the internet.

Our election system is unrepresentative, we have never had a national election, only a series of local elections. Most of our votes will count for nothing, and a government will be elected on barely a third of the votes.

The polls suggest that the election hinges heavily on actual turnout.

If lots of people vote (especially the young people) we may have some chance to negotiate a brexit that isn’t socially and economically disastrous, save our NHS from collapse, invest in our police and our soldiers and our green infrastructure and jobs.

If we leave voting to the old and the few then we will avoid none of those things and our economy, our NHS, our police force and social safety net will be broken even further. Even the very country may fall apart as Scotland and Northern Ireland decide they want none of this crap and quit.

Corbyn is sane and principled and peaceful and has a good plan for investment in our country. It’s not as good as the Green plan and I quibble with bits of it, of course. I hate Labour’s support for first-past-the-post and the drug-war, but Corbyn’s plan will heal a country hurt and divided.

I agree with May on one thing: I’ve never seen an election more important than this one.

We voted against the establishment over Brexit, votes all over the world have been voting against perceived establishment lately. Even the Trump thing, that’s what people thought they were doing.

Crippling the state with unnecessary austerity and making this country so horrible, poor, and divided that no immigrants want to live here will not solve any of our problems. Only investing in our nation, it’s people and it’s infrastructure can do that.